Maintenance Operation
Our online services will be affected or interrupted for a few hours on Monday, February 13, starting at 11 a.m. ET. 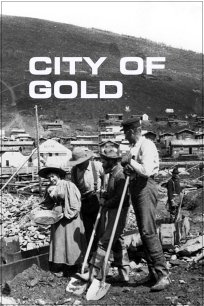 This classic short film from Pierre Berton depicts the Klondike gold rush at its peak, when would-be prospectors struggled through harsh conditions to reach the fabled gold fields over 3000 km north of civilization. Using a collection of still photographs, the film juxtaposes the Dawson City at the height of the gold rush with its bustling taverns and dance halls with the more tranquil Dawson City of the present.

One day I had a call from the head of photographs from Public Archives who wanted me to come over to look at stills photographs that had come down from Dawson City. There were 200 photographs shot by A. E. Hegg during the Gold Rush in 1898-99. They had been found some time before in wooden boxes in a sod-roofed log house. They were 8x10 glass plate negatives. These found their way to White Horse, where a representative from Ottawa Archives ordered a set. I called Wolf Koenig and Bob Verrall to come to Ottawa Archives to look at the prints. They were both excited. I decided to get Tom Daly involved and he was very impressed. We began to discuss Dawson City and found out that we knew nothing about it. Hugh O'Connor at the NFB knew a mounted policeman who had worked in Dawson City and invited him to come for dinner. He was full of incredible stories, and we decided we had to film in Dawson.

In June, 1954 Wolf and I flew to Dawson City to make a film. Dawson was overwhelming in all respects. There was no night--just day. It was a ghost town. It was the headquarters of a big gold-mining company still working on the creeks with huge dredges and hydraulic operations. A thousand workers came in every summer and left in the winter. The gold-mining area was hundreds of square miles called "the creeks." There were hotels like Pearl's Harbour, a favourite of American flyers during the war, with a bar--no restaurant. There were three bars in Dawson, and one restaurant working continuously, run by a Japanese black belt called Mitch. He needed the belt! There was a large hospital and a court house that was in session with a judge trying a murder trial. We decided to take that in--after one morning we felt sick.

The scale of everything was so huge and strange that we fell to arguing about what we should shoot or not shoot. There were too many visual riches. But, what was there of the Gold Rush? A lot of beautiful decayed abandoned buildings and a few ancient old men left from the Gold Rush. There were too many great photographic possibilities and some ancient old guys still panning gold if you could find them in the woods---and we did. One had been a silent movie comedian, Pete Huley, who still claimed that Charlie Chaplain stole his style and walk. He was authentic and there was a film in the Nugget Theatre, we were told. Pete was certain that we had come to work with him. He had a script ready.

An old man named Lorenz talked in German with Wolf. He had fought with the American Cavalry in the Geronimo and Sitting Bull wars, and we were certain from his stories that he had! Doctor Roux confirmed this with not a moment’s hesitation. We were angry that we did not have sync sound equipment. The mythology of Dawson was extravagant.

We were in Dawson six weeks and shot two films, Gold and City of Gold. There were all the stills to deal with--mountains of them and I found more in Edmonton as we were coming home.

City of Gold, Colin Low & Wolf Koenig, provided by the National Film Board of Canada