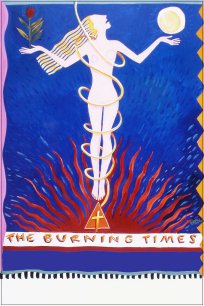 This documentary takes an in-depth look at the witch hunts that swept Europe just a few hundred years ago. False accusations and trials led to massive torture and burnings at the stake and ultimately to the destruction of an organic way of life. The film questions whether the widespread violence against women and the neglect of our environment today can be traced back to those times. Part two of a series of three films on women and spirituality, which includes Goddess Remembered and Full Circle.

The Burning Times, Donna Read, provided by the National Film Board of Canada