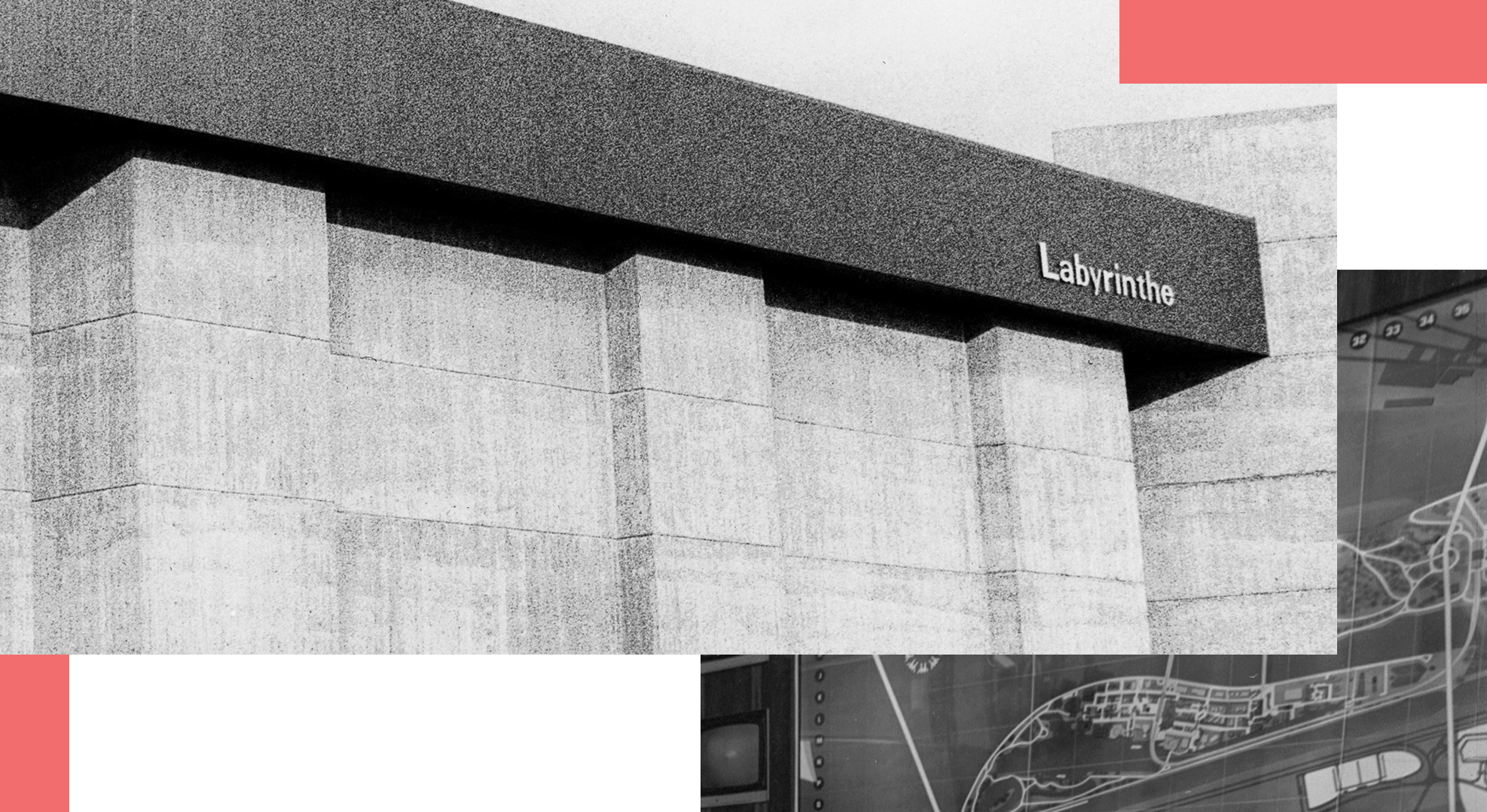 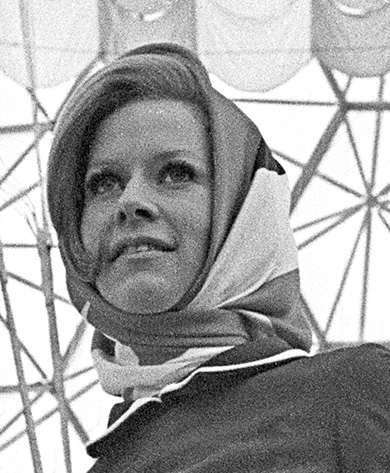 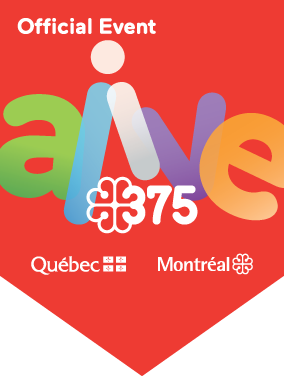 Expo 67 Live was entirely composed of colourful archival material projected onto giant screens. A unique and innovative installation by artist Karine Lanoie-Brien, this ambitious journey back in time thrilled visitors with its remarkable attention to detail from the “show of the century.”

Relive the spirit of the Expo era through this exclusive selection of NFB films.

Drawing inspiration from past multi-screen projections at Expo 67, like In the Labyrinth and A Time to Play, Lanoie-Brien created a captivating cinematic enclave where several projectors broadcast images onto giant screens installed on the exterior of the Maison Symphonique and Salle Wilfrid-Pelletier at Place des Arts. Six screens, forming a cube at the centre of the site, make up the narrative aspect of the experience, while the seven surrounding large-scale projections immerse us in the environment and add context to the story.

Made to measure for the Place des Arts building, the project—which is up to 15 metres high—invites visitors into some of Expo 67’s venues to relive the atmosphere of the pavilions and the anecdotes behind them. It’s a completely immersive, one-of-a-kind experience that doesn’t require any additional technology.

A JOURNEY IN TIME AND MEMORY

The project comprises the stories of several people who lived through the Montreal World Expo. After interviewing 10 attendees whose lives were permanently changed by the event, Lanoie-Brien crafted rich stories that serve to anchor the experience and offer up small, authentic moments from life at that time.

Among these stories is that of Roger La Roche, an Expo expert who worked with Lanoie-Brien as a senior advisor. La Roche was 13 years old at the time of his visit to Expo, and his story occupies a prominent place in the project. With his guidance, they faithfully reconstructed this historic event, creating an informative and unforgettable journey for modern-day audiences.

At Expo 67, the NFB offered visitors a new and original experience called In the Labyrinth, a precursor to today’s IMAX format composed of several large screens arranged in a cross-like formation. The show’s title was a play on the mythical Daedalus’s labyrinth, where Theseus killed the Minotaur. In the Labyrinth was viewed by more than one million people.

Fifty years later, with Expo 67 Live, the NFB has created another multi-screen work that aims to capture the imaginations of those who experienced Expo 67, as well as younger generations who’ve heard of Expo but never had the opportunity to see it.

Discover behind-the-scene images from the production process of Expo 67 Live. 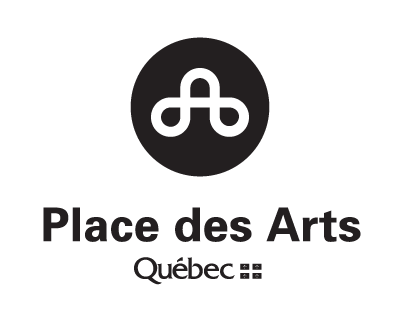 In 1967, on the eve of one of the biggest universal expositions in history, Montreal was in full cultural, economic, political and social swing. Under the leadership of Mayor Jean Drapeau, the city had undergone massive development, notably the transformation of Île-Notre-Dame and Île-Sainte-Hélène and the opening of the Metro. This redefining of the urban landscape was set against the Quiet Revolution, as Quebec leapt into modernity and opened itself to the Swinging Sixties. Quebeckers embraced the world, women gained emancipation, and we witnessed an incredible creative, scientific and technical boom. If society was rocked by major events—the Cold War, the Vietnam War, the race for space, the Civil Rights movement—Expo 67 embodied a vision of hope, a humanist future, a world of possibilities. In 1967, Montreal set out to meet the world, and the world came to Montreal.

Some NFB films about Expo 67

In the run-up to the launch of Expo 67 Live, rediscover the spirit of the Expo era through an exclusive selection of NFB films.

Experience the Expo hype with this photo gallery from the 1967 World’s Fair.

On April 27, 1967, the opening night of Expo 67 drew 6,000 visitors from 61 countries. The next day, the first full day of the exhibition, 423,000 people attended—about double the number expected.
The first person to pass through the gates of Expo 67 was Chicago jazz musician Al Carter. He had camped out the night before to make sure he was first in line.
During the first five days of Expo, 524 children and 167 adults were reported lost. All were found.
The NFB spent four years working on the films for its pavilion, the Labyrinth. It contained three chambers, two of which were film-screening venues. There were 30 screenings a day during the entire period that Expo was open.
The 1967 Universal Exposition was awarded to Montreal on November 13, 1962 (after the rejection of surprise candidate Long Beach, California).
The theme of Expo 67, “Man and His World,” was adopted on December 20, 1962, with Parliament’s authorization of the incorporation of the Canadian Corporation for the 1967 World Exhibition (CCWE). The law stipulated that the committee would have 12 directors: six appointed by the federal government and six by the province.
Five other locations in Montreal were considered to host Expo 67: Pointe-Saint-Charles, Maisonneuve Park, the domaine Béique in LaSalle, Tétreaultville, and Anjou–Saint-Léonard.
Several hundred Expo 67 postcards were produced exclusively by the company Messageries de presse Benjamin. It was the largest series of postcards produced in Canada to that date.
The Expo 67 site covered over 1,000 acres—nearly double the area of the Brussels Exposition.
The Habitat 67 project was launched by architect Moshe Safdie in 1963, and construction began in 1965. Inaugurated at the same time as Expo 67, on April 27, 1967, Habitat wasn’t fully completed until 1970.
The 12-car Expo 67 Minirail could transport up to 2,500 passengers per hour. It was part of the Expo Express network, which linked five stations. The cost of a ticket was 25 cents.
Most of the La Ronde shops at Expo were grouped together in three areas: Carrefour International (29 shops leased by 13 countries), the Village (crafts), and Fort Edmonton. For the rest of the site, there were five Expo-Service areas with Souvenir boutiques for different countries and Food stands

Stay up to date on all activities by subscribing to our newsletter.